The Abbey
environmental and historic heritage
THE LANDSCAPE: characteristics and significance

The prestigious Vallumbrosan Abbey of San Michele Arcangelo is a major monument characterizing the countryside surrounding Passignano in Tuscany’s Val di Pesa and has indelibly marked the agricultural landscape of the entire area. In fact, in the medieval era the monastery was instrumental in introducing tree crops, vineyards, and olive groves, by terracing the hillsides and using innovative irrigation systems. They encouraged reforestation and the organization of farmland into grids. By the end of the 19th century, the Vallumbrosan property boasted a size of about 653 hectares divided into 24 farms. The forest occupied 70% of the territory, the remaining arable land planted with vineyards and olive trees (25%) and pastures (5%).

Naturally, the Abbey’s cultural and spiritual influence on the area was extensive, reaching as far as the fortified village of Poggio al Vento and the church of Sant’Andrea; the compound of Calcinaia, a compact village with sloping morphological characteristics; the medieval Pugliano, birthplace of the painter Domenico Cresti, known as “Il Passignano”; Casterotto, from the Lorena period, with a Roman era archaeological site.
Today, this historical landscape retains a distinct identity with respect to the rest of the municipal territory. The great value of this territory has been formally sanctioned with the establishment, in September 2008, of the protected natural area of the Abbey at Passignano, pursuant to the European Landscape Convention. 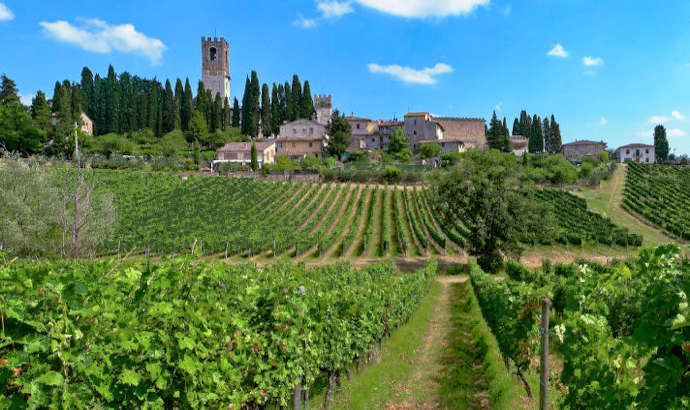 THE ARTISTIC AND MONUMENTAL HERITAGE

The site of the monument: history and architecture
The ancient Abbey, its role and influence over the centuries, along with the precious set of treasures it still contains, traditionally have been, and still are, great attractions for cultural and spiritual tourism. Saint Giovanni Gualberto, founder of the Vallumbrosan Order, lived and died here in the mid-11th century.
Nothing remains of the primitive residence of the religious community, established in Passignano prior to the 10th century, nor of the structures built after 1055 under the Abbot Leto, who was entrusted with the responsibility of increasing the Vallumbrosan community. In 1255, the monastery was burned to the ground by the Florentines and in 1266, under the leadership of Abbot Ruggero dei Buondelmonti, reconstruction began, lasting to nearly the end of the century. From this period, some of the cellar rooms remain, with vaults and sub-arches dating back to the 13th century. In 1441, Don Francesco Altoviti was appointed Abbot of Passignano. He was responsible for the initial reconstruction of the monastery in the Renaissance, which is more or less as it is today. With the work begun by Altoviti and completed by Abbot Isidoro del Sera (1445-1485), the monastery acquired the structure of a genuine Benedictine Abbey.

The great cloister became the fulcrum of the monastic compound, the place of meditation and from where one gained access to the community living spaces such as the refectory and the chapter house. Working alongside the Lombard master masons were the stonecutters Andrea di Neri and Mariotto da Settignano, to whom we owe the carvings of the cloister capitals, the doors and windows, the pulpit of the refectory, the heraldic arms of the vault and the portal.
In 1472, the painter Bernardo Rosselli painted two lunettes on the refectory wall, and below these, in 1476, brothers Domenico and Davide Ghirlandaio did the great fresco of The Last Supper. In the 16th century, the renovation work mainly took place in the church and, over the 17th and 18th centuries, various works were carried out within the monastery. In 1626-7, for example, the ground floor guesthouse was built; in 1636-8, the aqueduct supplying running water to the monastery, the stables, and the vegetable garden were completed; also in 1638, the fireplace in the 15th-century kitchen was rebuilt and enlarged; in 1755, the upper loggias of the cloister were enclosed.
In 1866, during ar wave of suppression of religious orders, the royal Italian government confiscated all the property of the Abbey including the monastery itself. On October 7, 1870, the Abbey of Passignano and its property, was auctioned and sold to the noble Polish family of the name Dziedusycki, while the church remained the property of the state. The family hired the architect Uguccioni to give the Abbey a fortified castle appearance, in keeping with the fashion of the time, by adding, in the 1870s, crenellated walls and towers, which still exist today.
After more than a hundred years, in October 1986, the Vallumbrosan monks were able to regain possession of their ancient headquarters and the Abbey resumed its activities, though the community is significantly smaller than it once was. 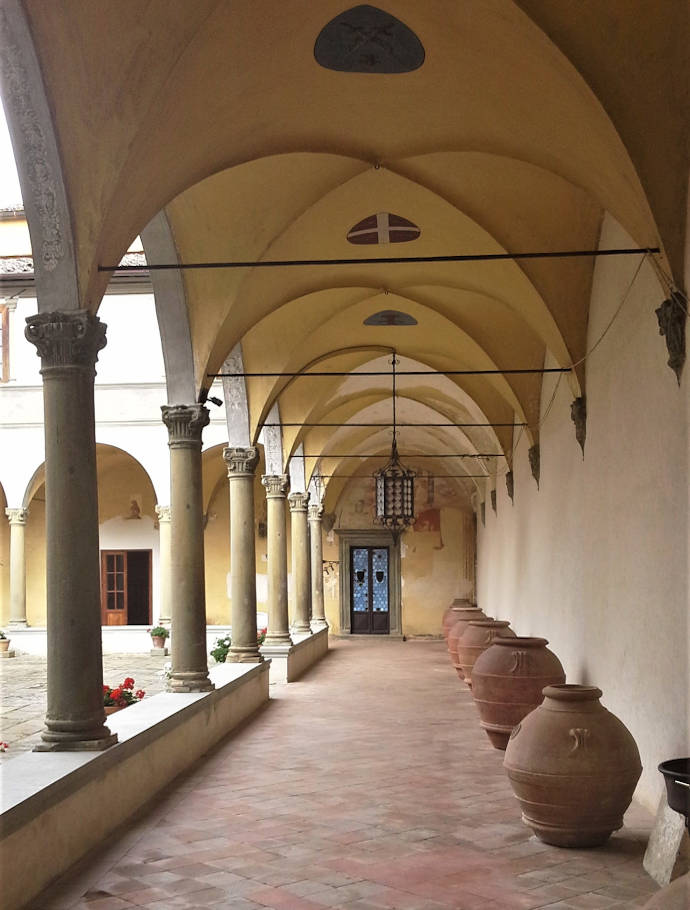 The Abbey Church
The Abbey Church preserves works of great interest including:
- a pair of 16th-century tables located at the entrance to the choir and painted by Michele di Ridolfo del Ghirlandaio;
- the frescoes by Passignano (16th century) on the vault of the greater chapel of San Michele Arcangelo;
- the frescoes by Alessandro Allori (1581) in the chapel of San Giovanni Gualberto and depicting episodes from the life of the Saint and the Identification of the relics;
- the paintings and frescoes of Benedetto Veli in the chapel of San Sebastiano and Sant’Atto, containing the miraculous crucifix from the 16th century;
- the reliquary of San Giovanni Gualberto with a 15th-century bust in chiseled and embossed silver, the base decorated with scenes from the life of the Saint.

The Monastery
On the ground floor is the large refectory room with The Last Supper painted in fresco in 1476 by Domenico and Davide Ghirlandaio on the back wall, surmounted by lunettes frescoed by Rosselli.
The fresco of the Last Supper, the first example of many frescoes of the same theme painted by Ghirlandaio, reveals how deeply the artist had assimilated the classical language of Brunelleschi. The cloister’s upper loggia begun in 1470 with a design by the architect Jacopo Rosselli and finished in 1483, was painted at the end of the same century by Filippo di Antonio Filippelli who represented the Life of St. Benedict on the upper floor, from the moment he left Rome until his death. The frescoes were covered in 1734 with a whitewash and only at the beginning of the 20th century they were brought back to light. 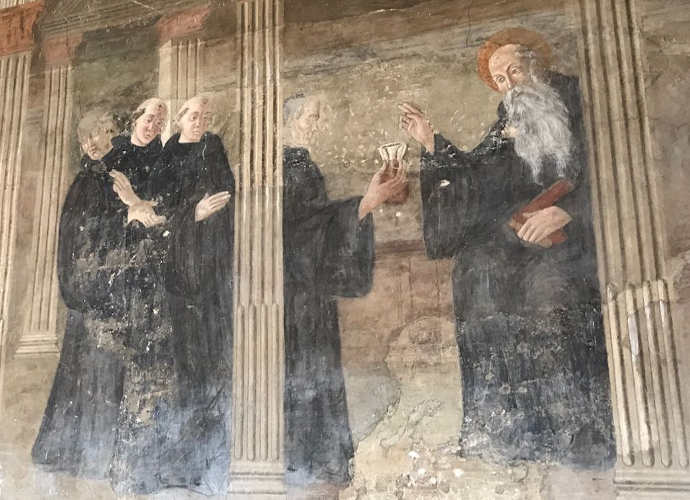 Artifacts of artistic, historical, and documentary interest
The Abbey of Passignano preserves a considerable number of valuable artifacts of historical and artistic interest dating from the 15th century to the end of the 19th century:
- the hand-hammered basin (picture 1) with umbonate bottom and a raised ring (15th century);
- the small polychrome 18th-century wax sculptures of devotional production as well as those in terracotta and wood;
- the series of devotional pictures (18th-19th century) on a wooden background and cardboard filigree painted with gold glitter, to form a phytoform pattern;
- the marvelous chasuble probably of Tuscan manufacture, in yellow satin with a large acanthus leaf design and a lotus flower (16th century);
- arched corner cabinet (18th century) painted in black lacquer with blown glass doors; decorations in gold and purple leaf;
- polychrome wooden crucifix (picture 7) datable to the early 16th century.